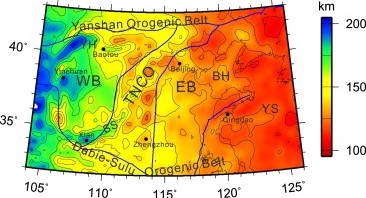 The lithospheric structure of ancient cratons provides important constraints on models relating to tectonic evolution and mantle dynamics. Here we present the 3D lithospheric structure of the North China Craton (NCC) from a joint inversion of gravity, geoid and topography data. The NCC records a prolonged history of Archean and Paleoproterozoic accretion of crustal blocks through subduction and collision building the cratonic architecture, which was subsequently differentially destroyed during Mesozoic through extensive magmatism. The thermal structure obtained in our study is considered to define the lithosphere-asthenosphere boundary (LAB) of the NCC, and reflects the density variations within the mantle lithosphere. Employing the Moho depths from deep seismic sounding profiles for the inversion, and based on repeated computations using different parameters, we estimate the Moho depth, LAB depth and average crustal density of the craton. The Moho depth varies from 28 to 50 km and the LAB depth varies from 105 to 205 km. The LAB and Moho show concordant thinning from West to East of the NCC. The average crustal density is 2870 kg·m– 3 in the western part of the NCC, higher than that in the eastern part (2750 kg·m– 3). The results of joint inversion in our study yielded LAB depth and lithospheric thinning features similar to those estimated from thermal and seismic studies, although our results show different depth and variations in the thickness. The lithosphere gently thins from 145 to 105 km in the eastern NCC, where as the thinning is much less pronounced in the western NCC with average depth of about 175 km. The joint inversion results in this study provide another perspective on the lithospheric structure from the density properties and corresponding geophysical responses in an ancient craton.