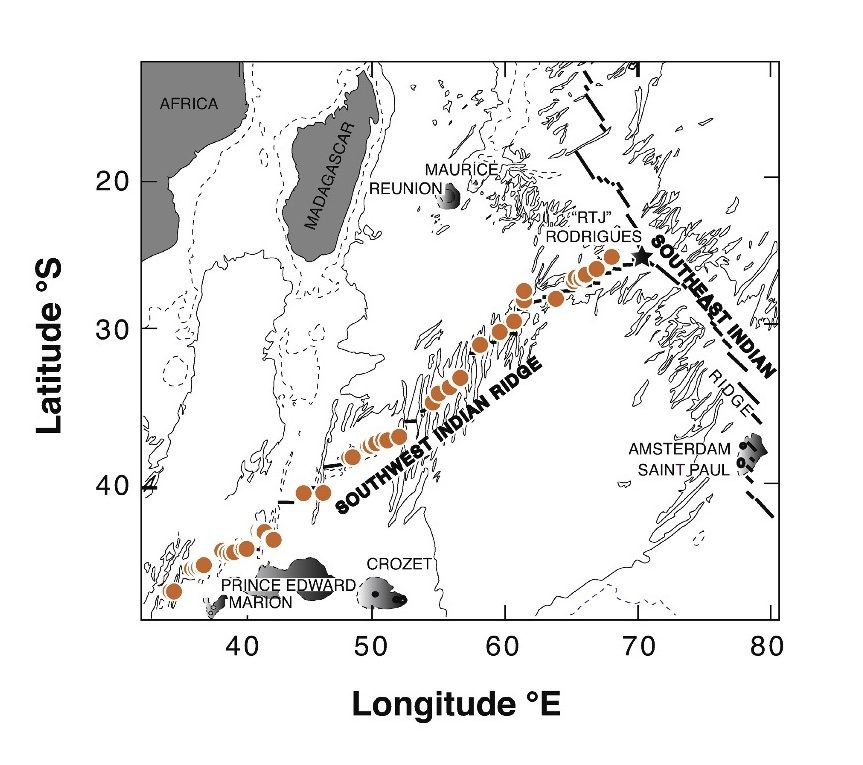 Helium isotopes were measured on 53 glass samples from the South West Indian Ridge from 32 to 68° E. The 4He/3He ratio is heterogeneous along the SWIR, with values down to 74,000 and up to 114,000 (R/Ra between 9.8 and 6.3), more variable than for helium isotope systematics measured at other mid-oceanic ridge systems, far from hot spots. Helium–Pb, Hf, Nd and Sr systematics on the SWIR basalts suggest that the large-scale geodynamics of the Indian mantle is mainly controlled by mixing between asthenospheric material and the lower continental crust. The latter is currently interpreted as having been introduced into the mantle by delamination during the Gondwana breakup ~ 180 Ma ago. Superimposed to this global-scale mixing, the asthenospheric mantle presents variable helium and Hf isotopic ratios and relatively constant Pb, Nd and Sr isotopic values. These results are interpreted in terms of a heterogeneous asthenospheric material source and the helium isotopic ratio represents a mixture between harzburgitic “pyroxenite-free” mantle and recycled materials such as oceanic lithosphere/crust. Using a model of helium diffusion similar to the one developed for recycled oceanic crust by Hart et al. (2008), we are able to constrain the size of the lower crust fragments present in the mantle. Results of this calculation indicate that the He and Pb isotopic compositions observed in SWIR basalts can be explained by mixing between depleted mantle and lower crust fragments up to ~ 5–10 km. This result shows that significant lower crust and, probably also subcontinental lithosphere material, can be removed during delamination during continental breakup.