Optical levitation of particles in vacuum

One can use the forces associated with light to trap particles or atoms: this is the basis of optical tweezers. Nanoparticles levitation uses optical tweezers to trap a particle in vacuum, as shown in the figure below. 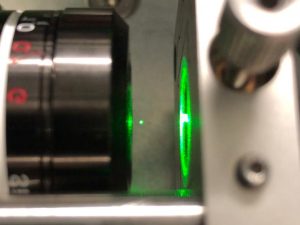 This setup allows to strongly decoupled the particle from its environment and to measure and control its dynamics finely. These unique features make particle levitation a perfect system for studying fundamental interactions, testing gravity’s effect on quantum systems, and investigating the thermodynamics at the nanoscale.

In that context, our group is interested in two main questions.

Using an intrinsically quantum system coupled to the levitated particle may favor its quantum control. Toward this goal, we use optical levitation of nanodiamonds hosting NV colors centers. These point defects of the diamond lattice have a spin S=1 that can be measure and control with standard optical technics.

By coupling the spin of the NV centres to the dynamics of the diamond we aim at controlling the dynamics of the particle up to the quantum regime.
For more details on the prospect offered by Spin-Mechanics with levitated particles see
« Spin-Mechanics with Nitrogen-Vacancy Centers and Trapped Particles. »
Perdriat, M., Pellet-Mary, C., Huillery, P., Rondin, L. & Hétet, G.
Micromachines 12, 651 (2021).

At the scale of a single particle, thermal fluctuations dominate its dynamics. In this regime, classical thermodynamics fails, and stochastics thermodynamics have to be called.

Understanding this regime is crucial due to its prevalence in numerous systems, from biology to nanomechanics sensors. It also allows shining a light on the work to information links or thought experiments such as Maxwell Demons.

The unique control on the dynamics of levitated particles is particularly relevant to these studies.

In this context, our work focus on the opportunity to develop thermodynamics protocols to reduce equilibration time or optimize work production.

For more details on how we use levitated particle to study nanothermodynamics you can watch the video (in French) below.
You can also read:
Rondin, et al. “Direct measurement of Kramers Turnover with a levitated nanoparticle” Nat Nano. (2017).