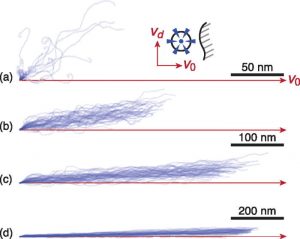 We studied how current-driven skyrmion motion in ultrathin films is affected by disorder. We modelled the disorder by assuming a grain structure, where the local perpendicular anisotropy fluctuates from grain to grain. We find that the velocity versus current curves are reminiscent of behavior in driven elastic interfaces in disordered media, such as domain wall creep. Moreover, we identify an extrinsic contribution to the skyrmion Hall effect due to disorder scattering, which is drive dependent. This work has just appeared in Applied Physics Letters.