Our latest work on chaotic dynamics in nanocontact vortex oscillators has just appeared in Nature Communications.

This represents the fruit of many years of labour, which began with a number of interesting discussions with Sébastien Petit-Watelot at the Institut Jean Lamour (CNRS/Univ Lorraine) in Nancy and Damien Rontani at the Laboratoire Matériaux Optiques, Photonique et Systèmes (CentraleSupélec/Univ Lorraine) in Metz. We had the idea to look at the possible waveform patterns that could be generated by the nanocontact vortex oscillator in its chaotic state. Myoung-Woo Yoo, whilst on his Marie Sklodowska-Curie fellowship with me on this topic, devised a clever pattern filtering algorithm to analyse the experimental time traces, which are quite noisy even at 77 K as a result of the relative low signal to noise ratios in these samples. This technique allowed us to really delve into the different patterns available, which turn out to be quite simple, as shown in the figure above.

Ultimately, we were able to show that the complexity and entropy of the signal can be controlled with the applied current, where the most interesting things occur in the chaotic regime. Basic benchmarks show that the oscillator can be a good random number generator with some interesting symbolic dynamics.

This work has been funded by the Agence Nationale de la Recherche as part of the CHIPMuNCS project.

Our paper on moving vortices around using multiple nanocontacts has appeared in Nature Nanotechnology! There is an accompanying News & Views piece by Prof. Teruo Ono of Kyoto University. 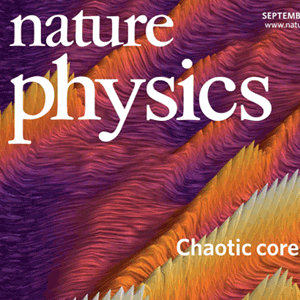 We made the cover of the September 2012 issue of Nature Physics with our latest paper on current-driven vortex dynamics in magnetic nanocontacts.