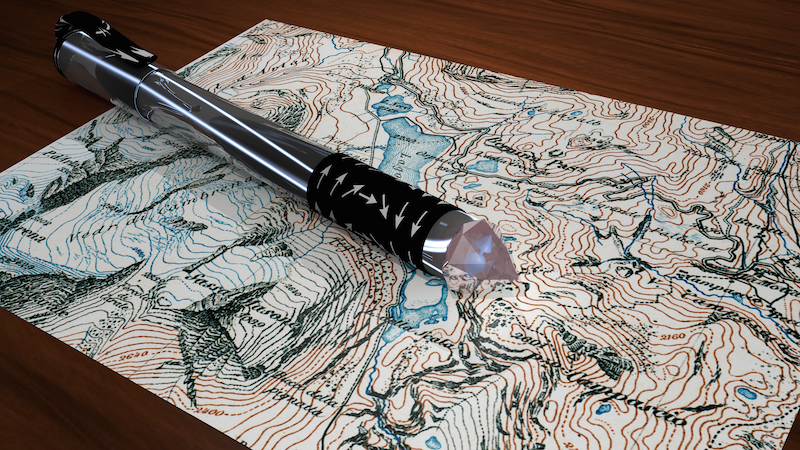 Are diamonds a physicist’s best friend? Using specially engineered diamonds, scientists at the École Normale Supérieure de Cachan in France, in collaboration with researchers at the French National Center for Scientific Research (CNRS) and Paris-Sud University, have devised a new way to map the landscape for magnetic objects on the nanometer scale. The technique opens up many possibilities for more energy-efficient microelectronic devices and increased information storage in the near future. It seems diamonds may provide the glimmer of hope that proponents of this technology seek.

The pioneering aviator Charles Lindbergh once remarked that life is a landscape – we live in its midst but it is only from a distance that we can describe it. Indeed, much of human endeavor is shaped by geographical landscapes, and it is through careful mapping of the terrain around us that we make sense of the world. In physics, scientists use the idea of energy landscapes in a similar way: by mapping the “hills” and “valleys” of the energy potential we can predict the forces that shape an object’s trajectory through “terrain”. Physicists have now shown how the magnetic landscape for objects called “domain walls” can be mapped out accurately in nanometer-thick magnetic films, thereby arriving at Lindbergh’s vantage point for nanoscale magnets.

Magnetic materials consist of different regions called domains, where the constituent magnetic moments in each domain all point in one direction. If we imagine each moment as an arrow, then domains would resemble pockets of arrows pointing in different directions. At the boundaries between domains, the arrows do not rotate abruptly from one orientation to the other, but rather gradually over a region called a “domain wall” about 10 to 100 nanometers in size (a nanometer is a billionth of a meter, or about ten thousand times thinner than a strand of human hair). These walls have a well-defined shape in one direction but are more elastic in another, and their motion can be likened to dragging a taut elastic band over a rough surface. As such, how these walls move through a material depends very much on the terrain it sees – valleys offer little resistance, mountains are barriers that require energy to overcome, and the wall can bend and twist as it moves through this magnetic landscape. 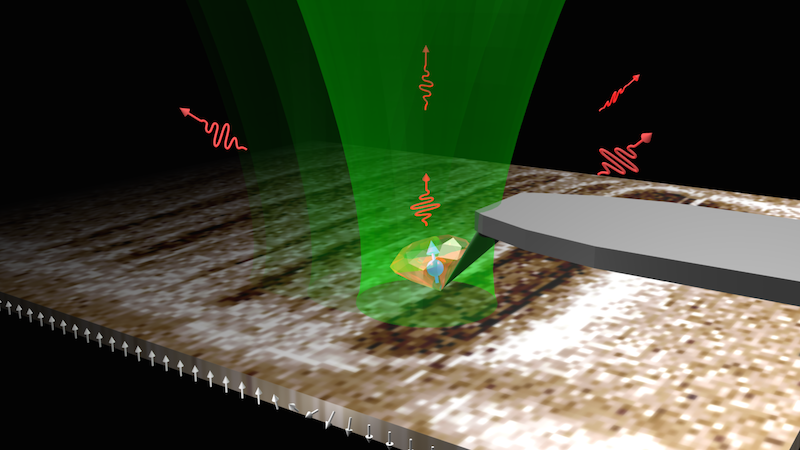 The mapping technique makes use of an atomic-sized defect, termed a nitrogen-vacancy center, in a 50 nanometer-wide diamond gem that is attached to the cantilever of an atomic force microscope. By illuminating this diamond with a green laser beam and observing the characteristic red fluorescence from the nitrogen-vacancy center with an optical microscope, it is possible to precisely determine the magnetic field emanating from the film beneath the diamond. By moving this diamond across the film, it is then possible to measure the magnetic field everywhere, thereby allowing domains and domain walls to be imaged and studied. While observing domain structures is also possible with other microscopy techniques, the Cachan group discovered that the laser beam could also be used to drag the domain wall, thereby allowing it to be positioned in the film in a controlled way. The magnetic landscape can then be mapped out by measuring the amount of energy required to put the wall at different positions, which means that the depths and heights of the valleys and mountains the wall sees across the film can be determined with good accuracy.

Domain walls already form the basis of many proposals of new magnetic storage schemes that will surpass the capabilities of hard-disk drives presently used in computers. One prominent example is the so-called “Racetrack Memory” devised by IBM, where individual bits of data are stored with a sequence of domain walls that are shuttled back and forth along a magnetic track. Mapping out the terrain of such tracks will be a crucial step if such devices are to see the light of day.