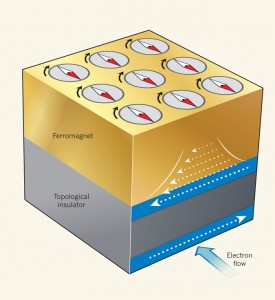 A News & Views piece I wrote for Nature has just appeared.

Topological insulators are well-known for their exotic electron-transport properties. A Letter out in this week describes how the spin-polarized currents at the surface of a topological insulator can be used to generate large spin-transfer torques in a transition metal ferromagnet. These torques are at least an order of magnitude larger than those generated by the spin Hall effect with heavy-metal substrates.